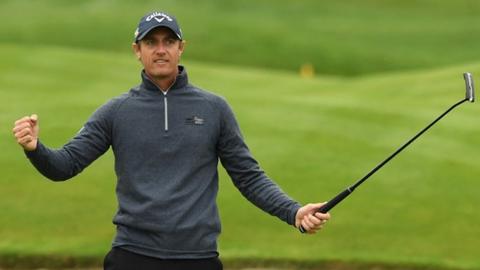 Despite carding a one-over-par 72 in the final round at Le Golf National, the Belgian finished one shot ahead of Denmark’s Joachim B. Hansen.

Colsaerts began the week 114th on the European Tour’s Race to Dubai and in danger of losing his card.

“I’ve been coming here for I don’t know how many years, it’s been a long road, ” he told Sky Sports.

“So many people have supported me over the years, that’s why I get so emotional. I went through ups and downs for so many years now.”

Recent years for Colsaerts have been a far cry from 2012 when he was selected as a wildcard by captain Jose Maria Olazabal to be part of the European team that pulled off the ‘Miracle of Medinah’ when they came from 10-4 down to defeat the USA 14.5-13.5.

Tom Wishon on the prime benefits of being professionally clubfitted…https://t.co/lu07nNDXLX pic.twitter.com/MYNGjskISY

From Hacker's Paradise: "Aldila has produced some incredibly popular graphite shafts since the turn of the century… But with all of their success, perhaps their most popular shaft ever was the Aldila NV."https://t.co/62T8EMCcno pic.twitter.com/bAZW8KkV81

The KBS Tour FLT is a Tour influenced shaft to fit the broadest range of players, from amateur golfers to tour professionals. The FLT provides spin consistency, efficiency, and control where it’s needed the most. The evolution of performance. | Player Driven. Tour Proven. | pic.twitter.com/yNqtDOJVsQ