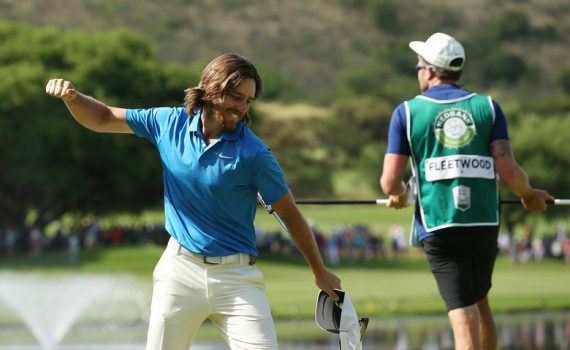 Tommy Fleetwood beat Marcus Kinhult in a play-off to win the Nedbank Golf Challenge at Sun City in South Africa.

Fleetwood started the final round six shots off the lead but carded a seven-under 65 to finish on 12 under par, which Swede Kinhult matched with a 68.

The Englishman, who had three eagles during his round, then made a brilliant par on the first extra hole to win.

It was the 28-year-old’s first victory since January 2018 and moved him up to second in the Race to Dubai.

That last victory came as he defended the Abu Dhabi Invitational in January 2018. Since then, Fleetwood has had three runners-up finishes, including at the 2018 US Open to Brooks Koepka, and at this year’s Open to Shane Lowry at Royal Portrush.

“It’s really, really cool when you win a tournament,” he told Sky Sports. “And it’s great for the people who go on the journey with you.”

Fleetwood’s 65 was three shots better than anyone else on Sunday and in the play-off he produced a magnificent up-and-down to ensure his par beat Kinhult’s bogey to take home the largest monetary prize on the European Tour – $2.5m (£1.93m).

He is now second behind Austria’s Bernd Wiesberger in the Race to Dubai standings, with only one event to go – the DP World Tour Championship in Dubai.

The Ryder Cup player is chasing his second victory in that, having won it in 2017.

“It’s an absolute privilege to have a chance of winning the Race to Dubai,” added Fleetwood. “It’s one of the things I’m most proud of in my career.

“I will start thinking about next week down the line. But I’m happy for the challenge. I may play terribly but I feel very ready.”

"It's like that favorite t-shirt that you never get rid of because it has the just-right feel you judge all others on." – jokerusn

The reviews are in! Read what @GolfWRX Testers had to say about the new PRO ONLY putter grips: https://t.co/NvbXzdD0dS pic.twitter.com/m4T5kjcAuQ

The Dynamic Gold X100/S400 pairing is a staple on the @pgatour. What iron/wedge shaft pairing do you have in the bag? pic.twitter.com/R8XKykkrHE

@KBSGolfShafts 560 and 580 shafts are strategically meant for smaller hands to help generate optimum spin, controlled ball flight, club efficiency and consistency. Learn more about the shaft made for the developing player at https://t.co/DuOv7uiNd5 #growthegame #juniorgolf pic.twitter.com/3MWJJtHb84