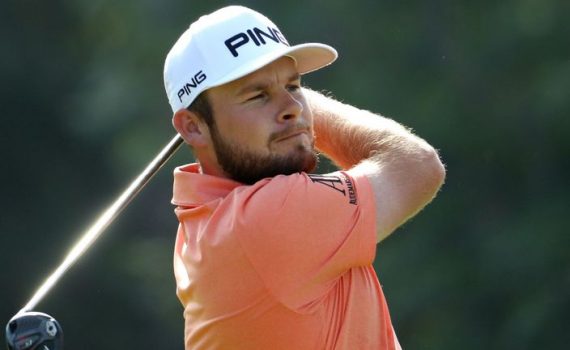 They finished under floodlights after six players had tied on 20 under par.

American Kurt Kitayama was knocked out after three holes while French duo Benjamin Hebert and Victor Perez, and South Africa’s Erik van Rooyen were eliminated at the first extra hole.

It was an incredible afternoon at the Montgomerie Maxx Royal course which ended with the first six-man play-off on the European Tour since 2003.

And it needed four goes at the 18th hole, a par five of 558 yards, to decide the outcome.

Kitayama and Schwab made birdies the first time they played it and it needed a brilliant chip-in from off the green to keep Hatton alive, as the other three were knocked out.

The American had originally set the clubhouse target at 20 under, after shooting nine birdies in an eight-under 64, the joint-lowest round of the day.

The 26-year-old from California looked on course for his third European Tour win of the season as he stood over a short birdie chance at the second extra hole but his effort shaved the cup.

And his par was not enough next time as Schwab sank a brilliant putt to match Hatton’s birdie.

But there was to be no maiden win for the 24-year-old Austrian as he missed a short par putt on the fourth playing of the 18th to hand Hatton victory.

It was Hatton’s fourth European Tour title and his first since winning the Italian Open in October 2017.

Multiple time winner on tours, the FLT Series is a tour-influenced shaft that fits the broadest range of players from amateurs to tour professionals. Providing consistency, efficiency, and control where it’s needed most, the FLT is the Evolution of Performance. #playtheredlabel pic.twitter.com/p7zI5LJIZf

The Graphite Challenge with @THPGolf kicks off tonight!