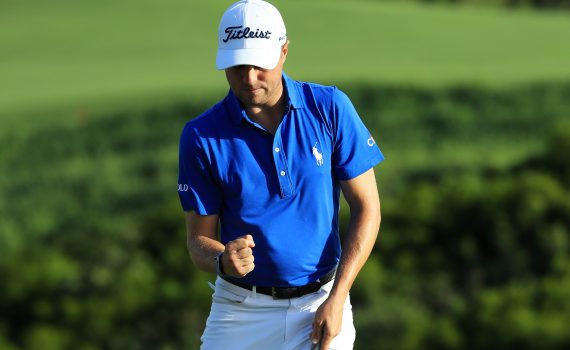 Justin Thomas said he “got very lucky” after beating Patrick Reed and Xander Schauffele in a play-off to win the Tournament of Champions in Hawaii.

The 26-year-old American won his 12th US PGA Tour title despite bogeying two of the last three holes in regulation.

He birdied the third extra hole to beat Reed after defending champion Schauffele was eliminated on the first play-off hole.

The tournament only features players who won on the PGA Tour last year and Thomas, the 2017 champion, enjoyed a two-shot lead with three to play, but dropped one at the 16th and then had a bogey six at the par-five 18th in a four-under-par 69.

Building on the success of their TENSEI™ AV Wood, and Hybrid Series, Mitsubishi Chemical has launched the TENSEI™ AV AM(2) Irons Series. “It combines the strength and stability of our Aluminum Vapor (AV) Weave with the versatility…”https://t.co/tYCE6kC0QN pic.twitter.com/pQhSaYBiG3

What do these 3 players have in common?

The three winningest grip models on the Worldwide Tours in 2019?

Looking to gain distance off the tee, with the tightest dispersion possible? The NEW KBS TD Wood shaft will optimize your performance in every way. Book your fitting at the @kbsgolfx today! | Player Driven. Tour Proven. | #playtheredlabel #woodshafts #changeyourgame #findyourfit pic.twitter.com/GT50Xuqajw