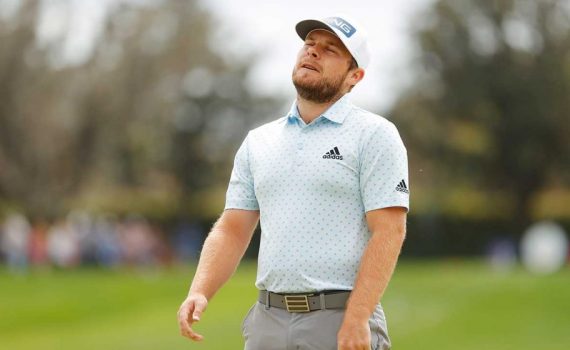 Tyrrell Hatton sealed the first English win at the Arnold Palmer Invitational and his maiden PGA Tour title with an eventful one-shot victory at Bay Hill.

His two-stroke overnight lead had gone in the first five holes after two bogeys on lightning-fast greens.

Hatton, 28, also had a double bogey in a two-over 74 but finished four under, one ahead of 2017 winner Marc Leishman.

Rory McIlroy, joint second at the start of the day, had two double bogeys in a 76 and was four back in fifth.

“It was such a tough day,” said Hatton. “After the double on 11 I thought I’d played my way out of it because I didn’t see the scoreboard.

“That putt at 18 – I have never been so nervous. I won’t ever forget this week.”

There were 44 players under par after Thursday’s first round but only four by the end of the tournament.

The conditions were similarly challenging for Sunday’s final round because of more swirling winds and rock-hard putting surfaces and Hatton dropped a shot on his opening hole after finding a fairway bunker.

Playing partner Leishman, two shots back alongside 2018 winner McIlroy overnight, saw his challenge checked by a double bogey at the third after he found water with his drive.

McIlroy holed a fine putt from the edge of the green to drop only one shot at the fifth but then thinned one out of a fairway bunker onto the rocks at the next and ran up a double bogey to drop two shots off the lead.

A drive out of bounds led to another double bogey at the ninth and dropped him to level par for the tournament, by which time Hatton was ahead again after a superb tee shot to two feet at the 195-yard par three seventh.

The Englishman moved two clear of the field with a second successive birdie but after finding the water with his drive at the 11th he careered through the green and made a double bogey to slip back into a tie at the top with Sungjae Im.

Learn more about Diamana Shafts at link in bio. pic.twitter.com/rbdDgK5Jgb

We’ve got a STACKED field coming to town next week for the 2020 Lamkin San Diego Classic. #FeelAllTheFeels pic.twitter.com/2DCgmMxKcd

In celebration of International Women's Day, we would like to recognize the women of UST Mamiya/UST ESSX and their contributions to the success of both companies. Thank you for all of your efforts and dedication! #IWD #IWD20 pic.twitter.com/3PqBJuRBLI

How would we describe the #TourWrapMicroSuede?